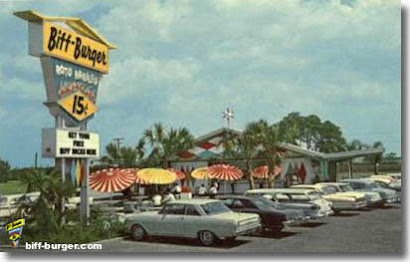 Welcome..... My interest in the former Biff-Burger drive-in began during my childhood when I frequently visited the Biff-Burger located in Hummels Wharf, Pennsylvania. Sadly, this location closed after 35 years of service and was torn down in 2001. As a tribute, I created and continue to manage a website to document and preserve the history of the former Biff-Burger chain (National Biff-Burger System), for all to enjoy and reminisce. Today, only two Biff-Burger locations still exist.... The 3939 49th Street North location in St. Petersburg, Florida which still uses the same name and has many of the original "classic" biff-burger architectural features. The second location, re-named to Beef-Burger during the 1980s, however is still referred to as biff-burger by the locals, is located at 1040 West Lee Street in Greensboro, North Carolina. Please feel free to share your experiences and stories of a former Biff-Burger location. C. Catherman Biff-Burger Fan and Historian
Posted by Biff-Burger Drive-In at 3:41 PM 72 comments: